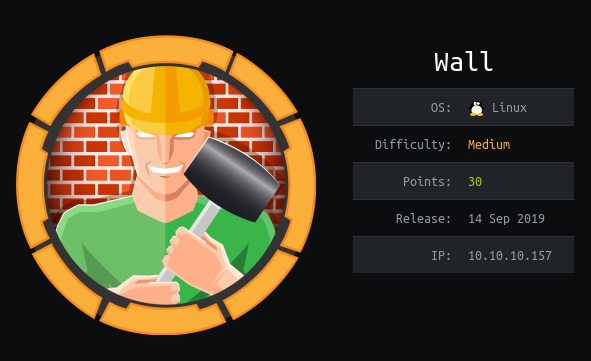 Wall,a Linux box created by HackTheBox user askar, was an overall medium difficulty box.The initial foothold was finding the cred for centreon server and the seeing the version is vulnerable and have a RCE using that, we get the reverse shell and user. Privilege Escalation was super simple after enumerating we find screen is a SUID and have a exploit on SearchSploit for that version. Using that we get the root shell.

We see only port 22 and port 80 is open.
Enumerating more we find /monitoring to be interesting but doing a GET request on that we see we are asked for a user name and password. But doing a POST request we see we are redirected to /centreon.

Accessing this new App we discovered that this version 19.04 of centreon is being used.

Searching centreon in searchsploit we can see that this version is vulnerable to authenticated RCE.

Its look like we need to grab some valid credentials, but default ones (admin:centreon) are not working.

I wrote this script to brute-force the authentication.

Now that we have valid credentials we can try to use the RCE exploit. But it will not work because of there is a WAF that is blacklisting some bash commands and some symbols (like space).

Every time the WAF discovers something malicious a 403 is returned.

After playing around with the exploit i was able to get it working.

to the above to let the script do a get request on our machine and get a payload.sh which contain a reverse shell.

Trying that we see we were able to do a get request but we didn’t get a shell back.

This can mean there is a firewall which is preventing to get us a shell.Trying some common ports we see we can get a reverse shell back on port 53 as that was allowed by the firewall.

We get the connection back and we can read the user.txt

Running LinEnum.sh. We see that /bin/screen-4.5.0 is present and is a SUID binary.

Searching on searchsploit we see an exploit for the used version.

Using that we get root on this box.

and we have pwned Wall 💃