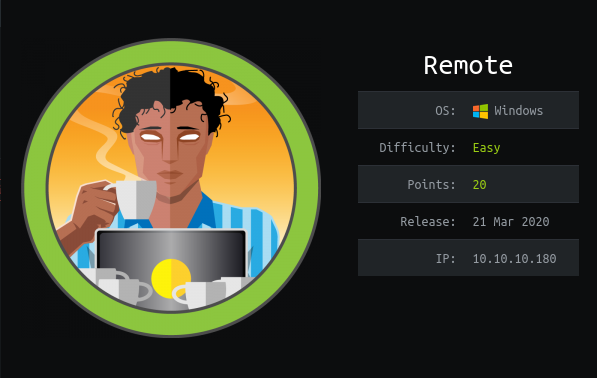 Remote,a Windows box created by HackTheBox user mrb3n, was an overall easy difficulty box.The Initial enumeration show that port 80, 111 ,139 and 445. The nmap scan also shows that NFS mount are present. So we mount it and look at the backup of the site and we find credential for web and also version of the web app Umbraco as 7.12.4 which have an RCE on exploitdb and get a shell as low privilege shell and grab user.txt. Enumerating again we see we have All Access to UsoSvc. Exploiting that we get a shell as Administrator.

we don’t have any credential so we move to another service. Enumerating smb we don’t find anything interesting. so i started looking in rpc and used

to list any mount path and we find /site_backup

and mount that using

and looking in that we find a smf file and trying to read in smf reader was a failure. So trying strings command to see all readable

and using that we get the user and possible hashes

so we have a credential as

Enumerating more we find the version of the application as 7.12.4 which have an exploit on exploitdb

Reading the exploit we see that it is just starting the calc.exe as the POC on the box so we modify the payload as

Note: I used nishang Invoke-TCP to get a reverse shell

using that we get a reverse shell

Enumerating again we find that we have All Access to UsoSvc so we can modify binPath and restart the service to get a shell as Administrator.

and we get a shell as Administrator

and we have pwned Remote 💃