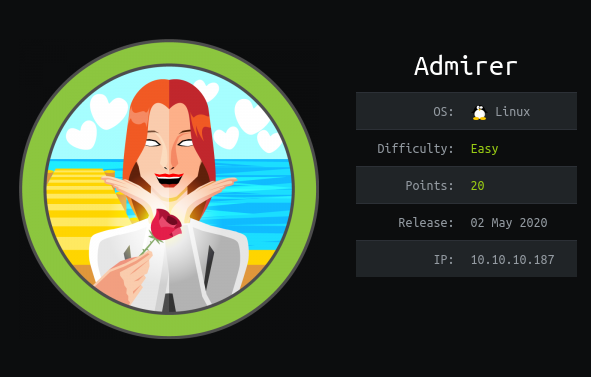 Admirer,a Linux box created by HackTheBox user polarbearer & GibParadox.The Initial scan shows that we can dump some contacts and credentials from admin-dir. which reveal the credential for ftp downloading data from ftp we see we have a copy of /var/html/www we see that it has utility-scripts a db_admin which shows that it is using some open-source alternative googling around something similar we find adminer. We also see a file discloser vulnerability using.So I hosted my own mysql db and connected to my db and started dumping files on the server and dumping ../index.php,which reveal the credential. Using that on ssh and username as waldo we can ssh to the server. sudo -l reveal that we can SETENV and run /opt/scripts/admin_tasks.sh. Using that we can exploit the Backup web,which is using python script. So PYTHONPATH hijacking we can get a root shell.

Running gobuster don’t reveal much but before that itself i had opened http://10.10.10.187/robots.txt

using that creds on ftp i downloaded html.tar.gz and dump.sql
checking the html dump i saw something intresting in utility-scripts/db_admin.php

so i tried all the passwords i already had on ssh with all the username.

which dump index.php which have the dbpassword as &<h5b~yK3F#{PaPB&dA}{H>

we see we can run /opt/scripts/admin_tasks.sh reading the code

and we see the python script

create a file as shutil.py and keep

and we have pwned Admirer 💃